Green fairways in Arizona, at last! 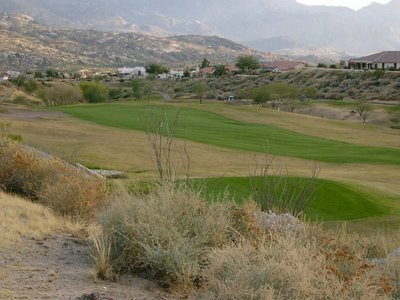 Here is our first report of the season from the Rolfsrud house at Saddlebrooke in Tucson. Briggs and Bill were there for their honeymoon in September, but, understandably, were too busy to file a report. Steve came later, nothing.

Virgil, coming by way of Fort Collins, arrived early this week. He filed this report:

Virgil writes:
As you can see, all the plants are flourishing. I credit it directly to Steve's magic formula fertilizer (no, I do NOT mean his bull sh), with a secondary role from strong rains this year. 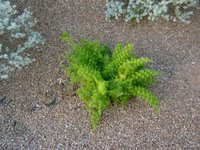 Even some plants (like the little green one) that were expected to be throwaways have done well in the drainage area that we moved them to. In other words, they were faring poorly in their original spots and we thought we would transplant them into an area where the excess water from the drip system collects, just to see if they could survive there. So now they're keepers! 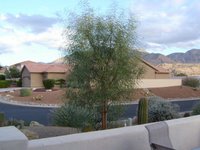 The tree is looking very healthy. Probably should even be trimmed up from the bottom a bit. It looks like it has done its root building and is now ready to grow big. Caretaker Barb watered it some extra in the early summer and then the big rains came so it had a good year. 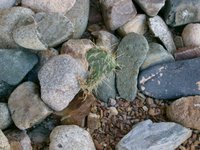 The little cactus is a volunteer that came up in the rocks. Just for the heck of it, I will transplant it over to the side of the house where there is a lonely cactus in an area without drip system water. 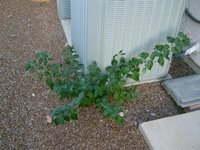 The plant growing up around the air conditioner was not there last spring, at least not to my recollection. It shouldn't be there as no one would have planted or left something that would grow into the air conditioner. Since it too has grown in an area without water, I will transplant it away from the air conditioner just to see what happens. Not sure why the gardeners did not pull it. 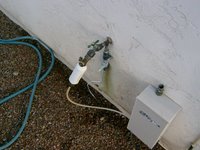 I sent a photo of a leaking faucet on the side of the house so that you know about it for the future. It appears that there is an on/off lever on this that supplies the deck misting system. I turned it off and will see if that stops the leaking. Since we do not need it outside of summer, it should never be turned on.

The transplanted bougainvillea has just finally recovered from being cut down and moved and is putting out its first flowers. The others are certainly doing well and it will be clearly worth it to regularly cover them to protect them from freezing weather. 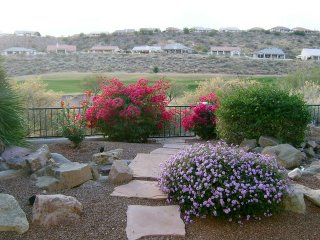 The first freeze is forecast for Wednesday and I will do so. Good thing one of us will be here throughout the winter to protect them. As you can see, they are far nicer than they were last year. They obviously are benefiting from the severe trimming we did late winter. 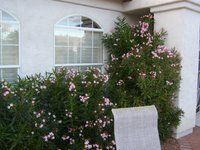 The front plants have now completely regrown from the substantial, overdue cutback that the gardeners gave them last year. They just need some deadheading now as the flowering is coming on quite strong. Again, they look much better than last year.

In one picture of the (much larger) palm plant, you can see the emerging "desert broom" plant. It is a weed that grows quickly everywhere and I will remove it. You can see the puffy white seeds that will be blowing about that make it such a pesty weed. If you see any like it, please get rid of it right away. 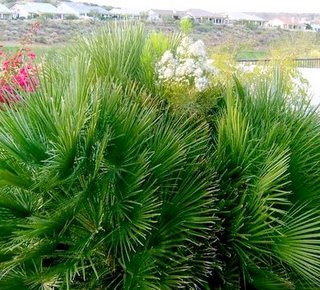 The three plants (rosemary?) that put out yellow flowers hardly have any flowers on them, some none. But I believe they are winter bloomers and do not suffer from freezing. They are very healthy looking and in need of a trimming, which I will do shortly. 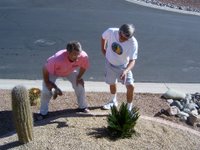 Steve, I see lots of holes that were either dug by you for replanting those two plants of yours (you can see the one with orange flowers that is doing just great, the other looks healthy as well and is just beginning to put out flowers) or by animals. Or is that the same thing? Anyway, I assume you left them unfinished for water collection purposes and to see if your plants survive, and I will now bury the water lines and fill in the holes as appropriate.

And finally, the golf course has greeeeen fairways at last! A little bit of green left in the bermuda roughs but that should be fully dormant soon. 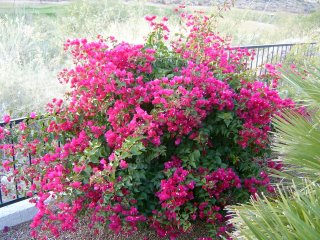 Grand opening of the Tucson Blog! 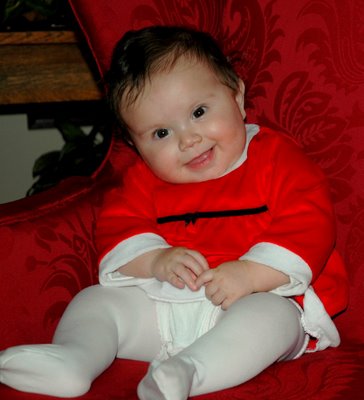 Okay folks. The snowbirds are heading to Tucson. Virgil is there now. So check this space for regular updates on what's happening in the Rolfsrud compound in Arizona. By the way, do you like my Christmas dress??? 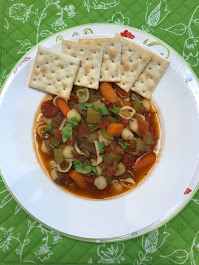 I am in lone self-quarantine downstairs in our two-level townhouse “out of an abundance of caution” after my Sunday flight from San Diego. Don’t want to infect K needlessly until I am “clear.” Have enjoyed a lot of activities on social media and microwaving some stuff, as I am sure you have too. Burgers on the outdoor grill, etc. Today, tantalizing smells drifted downstairs all morning, sort of a tease. And now here it is, Isolation Vegetable and Beef from Kathleen’s Soup Kitchen. It didn’t disappoint. Thank you K.