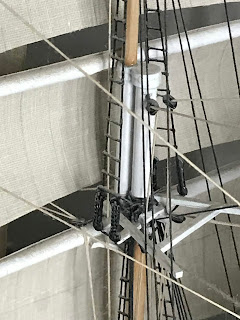 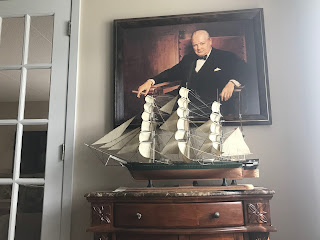 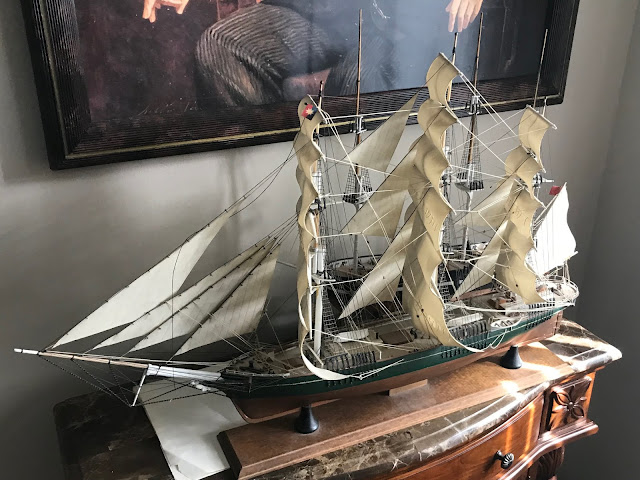 I built this clipper ship, replicating the three-masted Thermopylae, when I was 35, balancing out a career and family of three girls. Where did I find the time? Now that I am retired I have the time. I don’t have the patience. What.

Fire at Chicago and Lake


Dan got to bed a little later than usual last night owing to the three-alarm fire across the street. But he was out early this morning supervising cleanup of the former Robert's Shoes building at Chicago and Lake. There was no loss of life and they're still figuring the cause. This may spur some redevelopment at the site, it is hoped. The property is controlled by Allina Hospitals, who have the nearby Abbott/Northwestern health complex. Dan is in the Midtown Exchange building, home to the Global Market and offices of the Allina corporation. It's an ideal location as its handicapped-accessible for three blocks indoors. He ate breakfast this morning at the hospital cafeteria. The market below is closed on Memorial Day.

Memorial Day in the Netherlands


This weekend we will hear about how we’ve lost the true meaning of Memorial Day. At times like these, it’s comforting to hear about those who haven’t. I wrote this during a recent visit to Europe and share it now again with friends on this Memorial Day weekend.

--------
Netherlanders are legendary for the protection and appreciation of the memory of their liberators. Particularly noteworthy is the nation's attention to the graves of those who died on their soil. Every one of the 8,600 buried at the Netherlands American Cemetery and Memorial has been adopted by a family. They eagerly learn about the man and communicate with his survivors, maintaining this connection and memory in perpetuity.

This Memorial Day, as in every Memorial Day, while Americans are enjoying their barbecues, 10,000 to 20,000 Dutch people will gather among the 8,600 American graves for services and music, mostly Mozart, to remember the sacrifices of their liberators. Families without a grave to adopt are allowed to adopt a name from the Missing In Action wall.

Yesterday we traveled to the location at the dike where Sgt. William Dukeman of Easy Company of the 506th Parachute Regiment fell during the ambush of two companies of Germans. Fifty Germans were killed, and 100 taken prisoner. Dukeman was the only death suffered by Easy.

Today we met Peter Schroyen, 48, at the American Cemetery, a beautiful expanse in the Dutch countryside near Maastricht. When Peter heard it said that Dukeman's death was "worth it" in the episode of The Band of Brothers depicting this event, he resolved to learn more of this one man lost. He resolved to adopt his grave, but learned it had been taken by the same family since 1945. But last year its last adoptive care taker died and Peter immediately petitioned and won the right to adopt Dukeman's grave and family. "I was very lucky," he told us, "there is a waiting list and usually you have to take whomever they give you."
Today he took us to see his adopted grave, telling us in amazing detail all about William Dukeman. He knows about William's family problems growing up, how the Army was his way out of a difficult home situation. 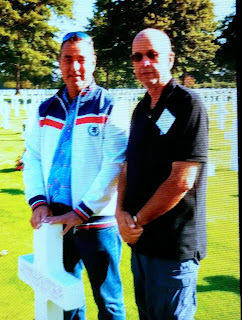 More than that, Peter has met his relatives, traveled to Denver to see them and learn more. He has hosted family descendants at the cemetery in a flag refolding ceremony.

On many weekends, Peter drives out to the cemetery. He can spot Americans by their shoes and he approaches them to represent the appreciation his country has for the many sacrifices made.

Thank you, for what you do, we said to him. "No," he contradicted. "It is so little that we do, so much that you gave." His hometown is very near the German border and it was occupied immediately at the start of the war. "What could we do, we had weapons from World War I. We waited so long for liberation."

Peter is a most remarkable man, but in the Netherlands, he is not unusual.
Posted at 4:30 PM No comments: 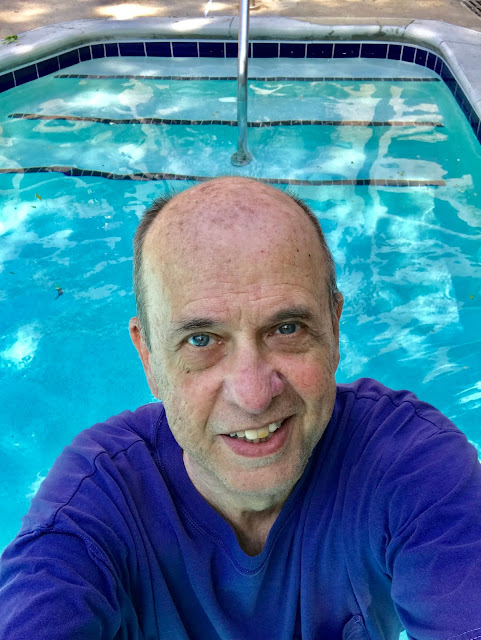 Bragging rights were up for grabs today with the seasonal opening of the swimming pool and we took full advantage.  Water temperature is at 75 heading for 80 and was just right for this senior. Air temperatures in the 90s this weekend. Enjoy!

Two rubies and a peridot 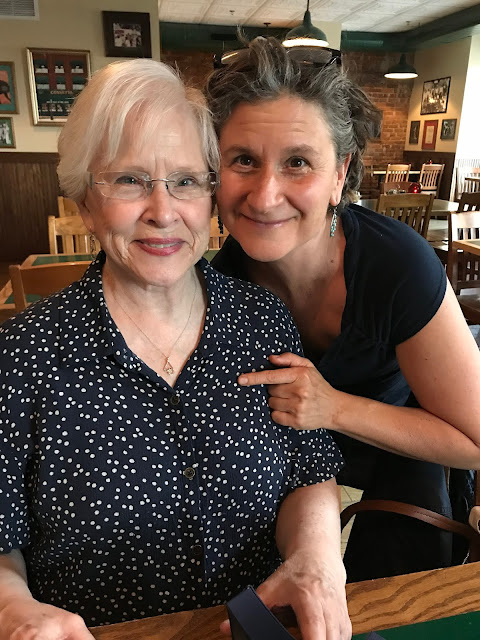 Jennifer's gift to her Mom today was a Mother's necklace with stones representing her three children. The rubies for her two July girls (Marcy and Missy) and a peridot for her third, Jennifer, an August birth.
We had dinner at Cossetta's in St. Paul. 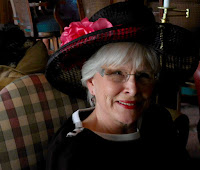 Kathleen's picks are in for today's Preakness Stakes. This is a smaller field than the Kentucky Derby; here are the first three winners: She's got Quip, Good Magic and the Kentucky Derby winner Justify.
We shall see in two hours. 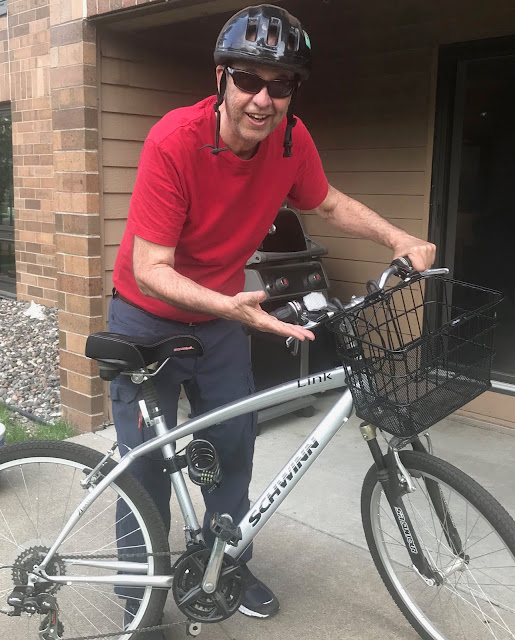 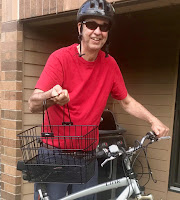 Got a new spiffy bike basket today, just the thing for bringing home the groceries. The nifty snap-off basket easily contains a half gallon of oat milk, a bunch of kale or spinach and whatever plant-based whole food the health-conscious senior requires to keep cholesterol and blood pressure down. And no plastic or paper grocery bag required, gaining extra eco points. Absolutely the hands-down envy of the neighborhood grocery co-op. Keep it local, baby, the stroke survivor advises.
Now we await delivery of the new bike bell. Ring a ding!

Today's walk on the wild side 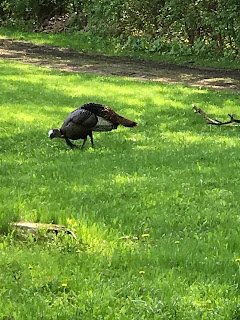 Smack in the center of the city, the urban adventurer happened upon them. She was too shy and quickly disappeared from sight, but the proud Tom was still there with a full mating display that would attract the most reticent, at least it attracted the camera long enough for these shots, taken beside the swimming arrangement on the bluffs at Highland Park. 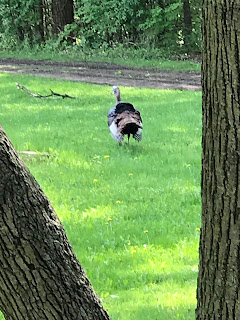 Take a bow, and a bow 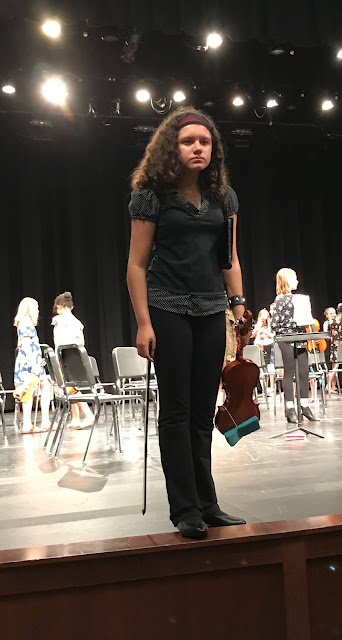 Our second violinist played with her Eagle Heights classmates in a performance at the Eden Prairie Spring Orchestra Concert tonight. Emily is 12. Grandma and Grandpa were in the front row, along with her mother, Melissa, in the plush auditorium. 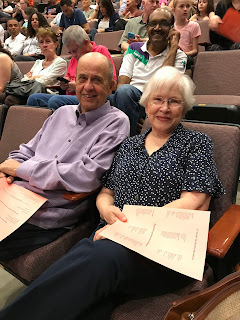 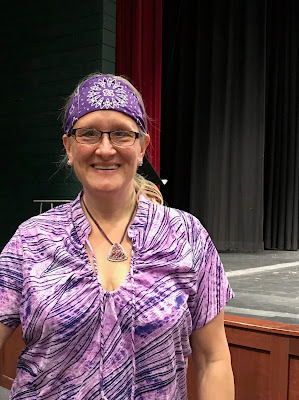 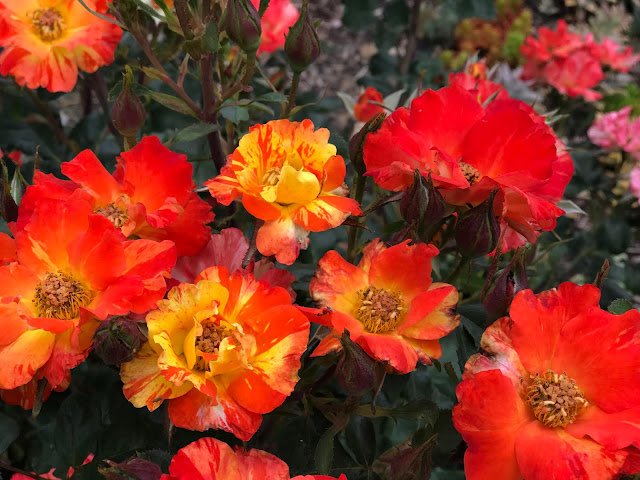 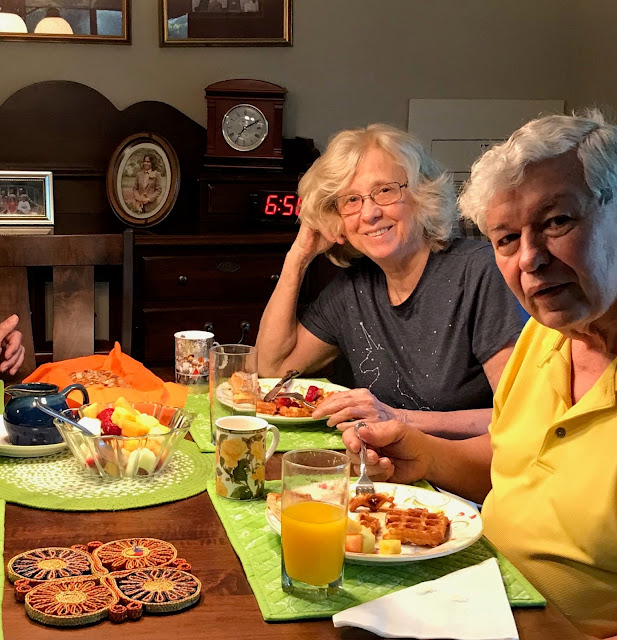 Of course we had waffles for breakfast. Why? Who's asking?

We got a lawn sign today from Mackenzie County in western North Dakota. Our cousin, John Rolfsrud is running for county commissioner there. We wish him the best and expect him to get things straightened out at the courthouse. 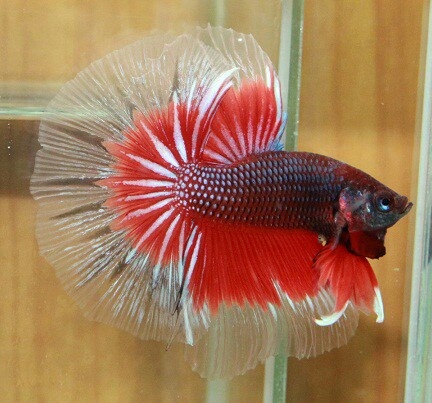 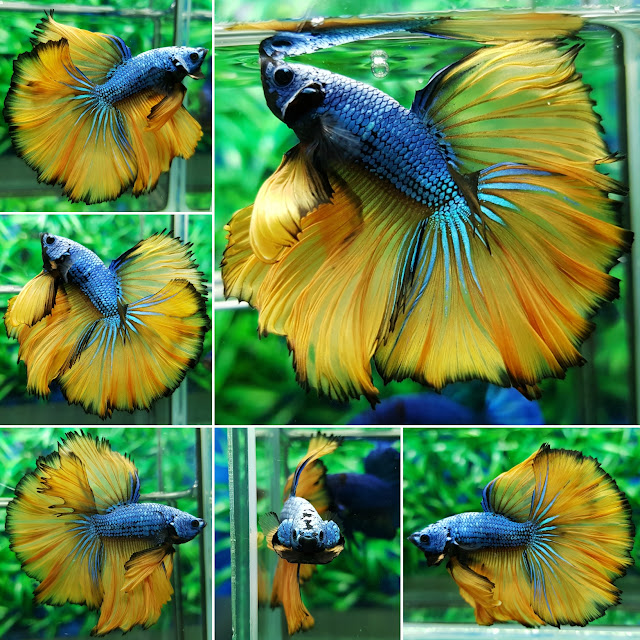 Hai sent this photo series of one of his Beta fish that came in a plastic bag from China. Yup, doing fine now, showing off its excellent coloring. He has more, will breed. Interested?
Posted at 11:56 AM 1 comment: 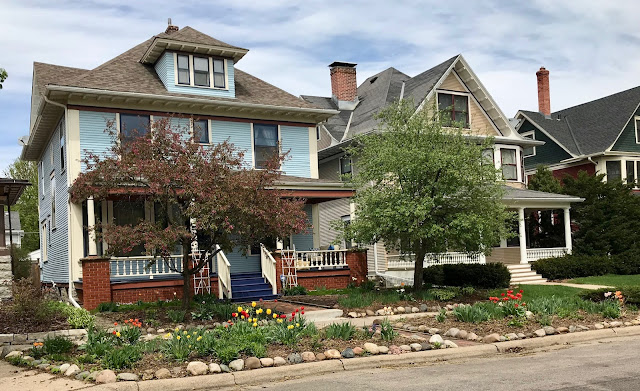 All the big old well-kept homes are not on Summit Avenue. Most any street has houses like these, perhaps with flowers in bloom.

My goodness, she picked the winners! 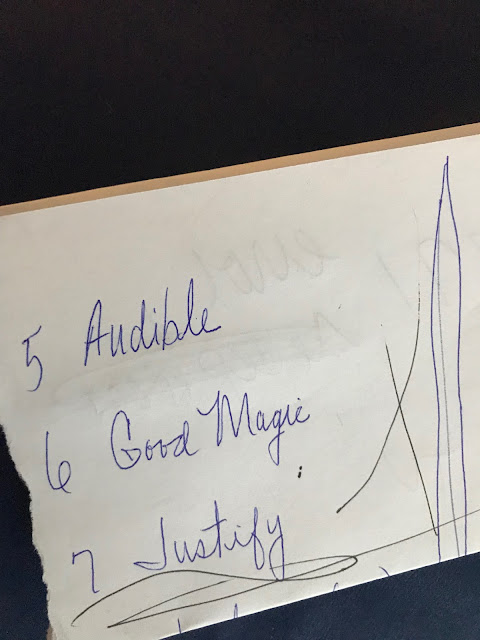 We didn't go to the track today, but if we had, we would have won the Kentucky Derby boxed trifecta. Kathleen picked the three top horses today! Kathleen showed Stan her picks before the race, he paid no attention, but when the race was run, sure enough. She had picked them. One of the disadvantages of moving away from Shakopee.
Didn't go today, darn. Woulda, coulda, shoulda.  Looks like $10 would get $250.
Posted at 6:06 PM No comments:

After the rain, yesterday, in Jerome, Arizona