Bruce Grant and the Dogwood deer

When I pulled the arrow from the heart of that Dogwood deer, I had no doubt who dunnit.

It was back in the 90s and Kathleen had seen a few life-sized seasonal decorative reindeer at Bachman’s or Menard’s or somewhere and she wanted one. They were made of all natural materials, willows and branches, and they cost at lot.

Seemed a shame to spend that kind of money on a fake deer when you had all the materials for it available in the garage or growing in the yard. So I cobbled together a PVC pipe skeleton and tied up twigs from our big Dogwood bush in the front yard. It took a few days, but soon I had a presentable life-sized reindeer for front yard display. A stag with oak horns, we called him "Twig." He looked as good as the ones at Bachman’s, you’ll have to trust me on this because our pictures of it are packed away for our next move.

Twig was so realistic that passing dogs would strain at their leashes and bark when they were walked by.

The morning after I put this pride and joy out onto the lawn, this artistic masterpiece, it had suffered an indignity unmatched by others.

I plucked the offending arrow from the chest area, a kill shot if there ever was one on a Dogwood deer, and marched across the street to see the usual suspect.

Bruce D. Grant denied having anything to do with it. Who would do such a disrespectful thing? he replied in mock concern. But it was no good. The twinkle in those steely eyes, just like his father the legendary Vikings coach, betrayed him.

We had a good laugh and I returned his arrow. 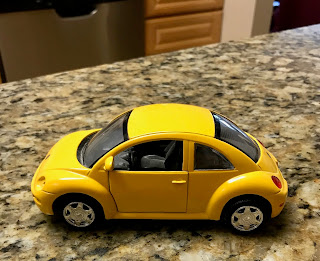 Bruce was a good friend. We golfed together on weekdays when he could sneak out of work. We joked over beers in the basement. Once he brought his little daughter Natalie over to present a tiny replica of Kathleen’s little yellow VW bug she liked so much.

They are burying Bruce today, the victim of a brain tumor. Much will be said about his many past deeds. We will remember him for his endearing sense of humor, a fun-loving neighbor, gone too soon at 57, a life well-lived.
Posted at 10:38 AM 1 comment:

Chaplain's reward will be in heaven

I still have no idea who that chaplain was, he said he was a relative. Cousin or something. I’ve had no luck in 50 years in finding him. I’ve tried.

I was in Missouri at the time, along with other teenage conscripts and college grads, learning the brutal arts of modern jungle warfare. The only relief that hot summer was the promise of a day of abuse in the consolidated mess hall, taking my turn at kitchen duties for our training unit. (I believe the mess hall was air-conditioned, prompting the mess sergeant to frequently shout at lingering diners, “get out of my mess hall, take your apple with you, get out now,” as others stood waiting in the heat outdoors for their chance at rations.)

No, a day working in the mess hall started at 4 a.m. and finished after dark, a day of misery just to endure. Fortunately it didn’t come up often.

So it was with surprise and relief that I heard the unexpected notice shortly after dealing with mounds of dirty breakfast dishes. “Rolfsrud!” the messenger from headquarters screamed to no one in particular, “Rolfsrud, report to the chaplain’s office!”

That was it. Nothing else. An order from the chaplain’s office takes priority over the grease pit. Nobody would have any idea what the order was about and wouldn’t hint if they knew. Just do it.

So I found myself tossed outside on the sidewalk that July morning walking the half mile to the chaplain’s office, past the manicured lawns of the many bureaucratic entities necessary to mount a ground war.

What could this be about? A death in the family? A tragedy back home? It certainly wasn’t going to be good news. I hadn’t had a lot of that lately, so I decided that whatever this was, the bad news could wait. This was an opportunity.

So when I reported to the chaplain’s assistant clerking the busy front desk, I gave him my name, he sort of mumbled, and I went directly to a comfy chair in the large waiting room. And waited.

I don’t remember what I did those hours in the waiting room. I certainly didn't ask when the chaplain would be ready for me. All I knew was that there were no mess duties, it was air-conditioned and the chair was soft. I was thrilled just to wait, the picture of patience. And this I did. Morning turned to afternoon and I waited. No lunch for me.

No one was looking for me, no one yelled that it was my turn to see one of the many chaplains. It was as if I were invisible in that room with busy troops coming and going, not noticing a slick-sleeve private probably awaiting grief counseling in a dark corner of a large waiting area.

Finally, after an eternity, a kind voice came from one of the office doors. “Are you Rolfsrud? Oh. I’m sorry. I didn’t know you were out here. I didn’t think you were coming. I’m sorry you had the wait. Come in to my office,” he said -- respectfully.

I did, still curious about what was up, but not wishing to rush it. The office was spacious, suitable for a sky pilot of some distinction. I think there was an artist drawing of Jesus. With a beard and long hair.  I still don’t remember if you salute a chaplain. Don’t remember if I did.

I was shocked and amazed. I had no idea who this decent officer was, or even why anyone in authority would speak to me with humanity in his voice. I didn't care. I settled in to the soft chair, hoping this pleasant conversation would last for the five weeks I still had to go in this god-forsaken place. It didn’t last of course. We touched on a few things, had little in common. For the life of me, I can’t remember the chaplain's name. I’ve tried, but the shock may have altered my abilities. Don’t even remember if he was on Mom’s or Dad’s side. Anyway, I do remember the last thing he said : “Is there anything else I can do for you?” much like a tech does on a help-line. There wasn’t, of course, unless he could inspire divine intervention to get me the hell out of here.

Frankly, he had already done much more than enough. It was twilight by the time I got back to work at the mess hall, and nobody had missed me. I don't remember if I took the most direct route back to the mess hall. The big gang of soiled and sweating soldiers had dutifully gone through their day of misery completely without my assistance.

I should have felt guilty. I didn’t. After all, I was ordered to go see the chaplain, whoever he was, and as far as I knew, that order had been heaven-sent.

Starting out close to the finish line 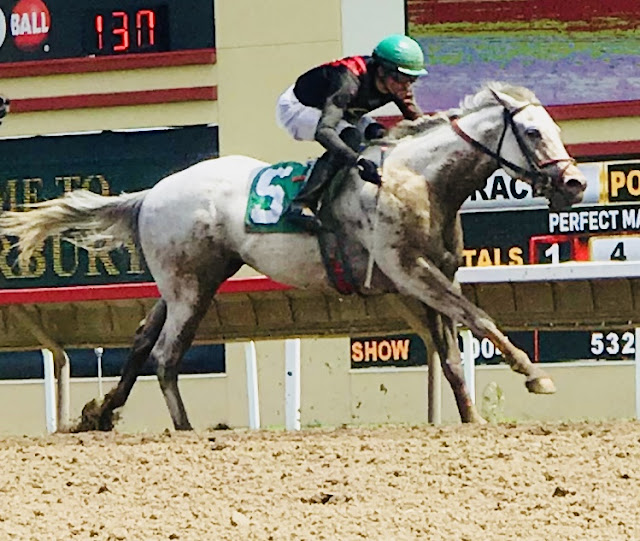 Race no. 5 at Canterbury Park was named after and run in honor of our good friends, Stacy and Kitty, celebrating their recent marriage today. We gathered in a cabana at the finish line for the festivities, attended by friends and family excited for the new couple’s future together. We got to know the couple a year ago, when they moved to a next-door villa at Abbey Point. We moved out shortly thereafter. The two events have absolutely nothing to do with each other. Also attending today were new friends Rick and LuAnn, the couple who bought our Abbey Point home. No complaints. Yet. 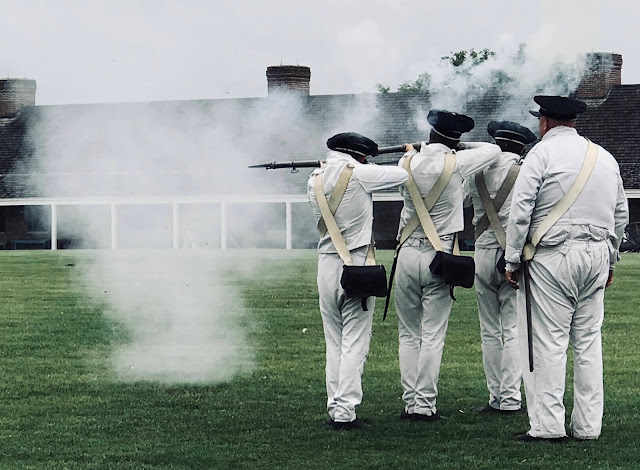 Cool weather and an occasional drizzle kept the tourists away from nearby Ft. Snelling today, making the perfect venue for a lengthy hike with lots of interesting things to see. We're moving from the area soon, and it would have been a shame to have missed seeing this historic site. We happened by when they mock-trained on muskets and a big old cannon today, firing all of them after warning that you should plug your ears. Below, a docent explained how cooking was done; there were gumbo recipes and things you would not expect. A lot of cooking for officers was done by slaves and incorporated spices, rices and gumbos and beans often used in West Africa. If you didn't have a slave, you could always could rent one from the post store, for the duration of your service. Really. 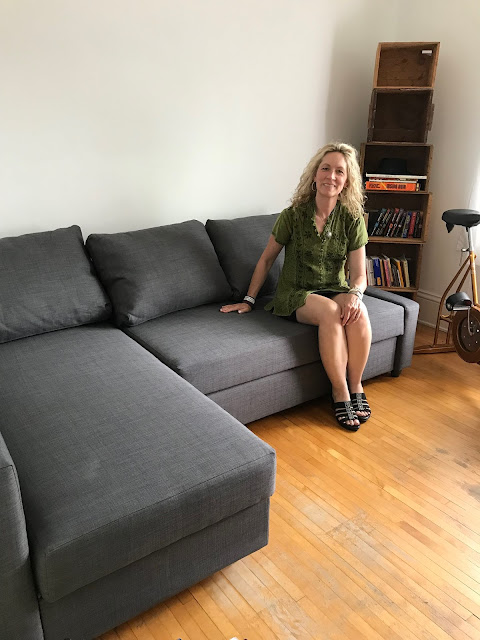 Marcy got a couch for her birthday, something she's wanted for a while for her south Minneapolis home.
Posted at 6:07 PM No comments: 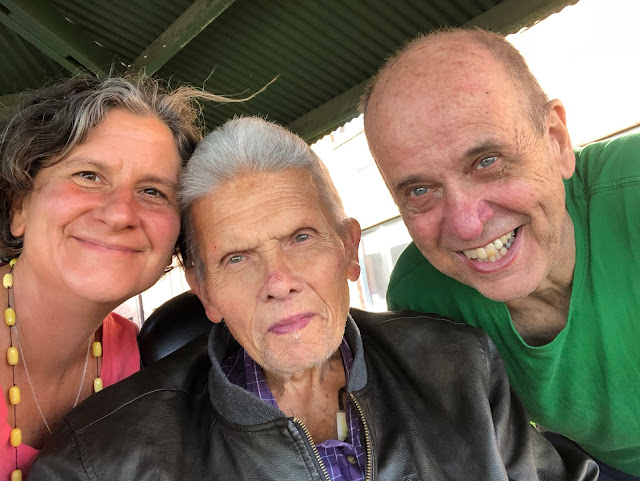 Jennifer and Stan strolled the two blocks to the Highland Chateau in St. Paul where Dan has taken residence. He particularly enjoys his spot in the sun at the chateau. The french fries not so much. We will move from our apartment to Eden Prairie on August 16. You'll need a scorecard to keep track. And we had four showings at the condo so far. No bites yet.

Glass man on a rainy day 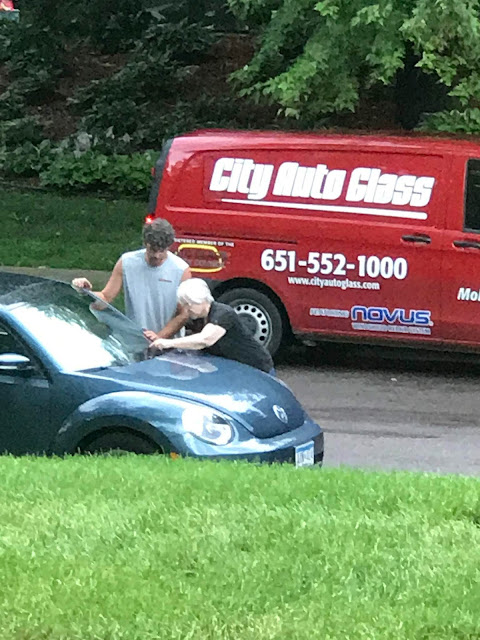 It's a big day in St. Paul. The glass man is coming to replace Kathleen's dinged windshield. It hit like a bullet. Loud. The glass man doesn't have a free box of steaks but he's got a great head of hair. Frizzy in the rain, though, he complains. 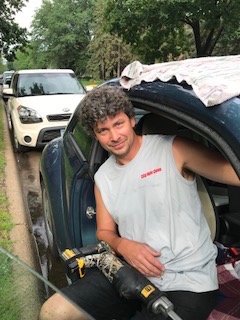 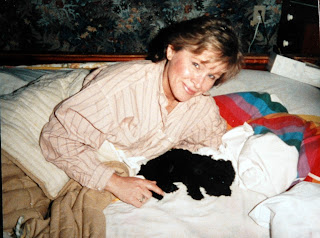 We're dog-sitting Ruby Rose while Virgil and Kim are gone for a week. Birdie is in charge, but not quite sure how to keep the young one entertained all day long. Photo at right is taken from the archives, when we were just getting started with Daisy. Had poodles ever since.

A dip in the pool Sunday night