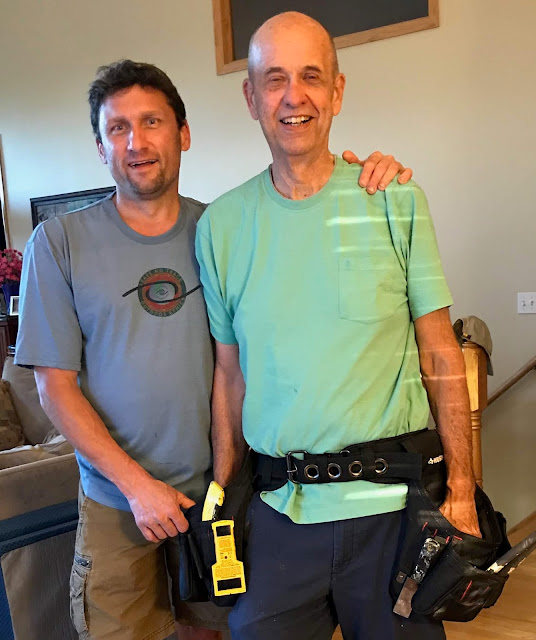 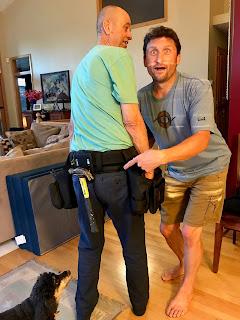 It’s been waiting in Andrew's garage for months.
Stan’s Christmas present was slow to arrive, but it seems like it just kept getting forgotten. Last night Santa finally showed up. Andrew delivered the tardy gift, no wrapping, no fooling: a brand new tool belt, worthy of appearance on HGTV, and so very macho, full of pockets and places. Like the manly man he is, Stan strapped on the work ware and began filling it with tools, finding a hammer for the hook up in the back, just like the big guys do. Now if there was just a project requiring massive tool applications. Not yet. But we’re ready when it comes up!
Thank you Andrew, your Christmas gift is coming in September.

“Put the marshmallows back, sweetie,” I said to my wistful, 13-year-old granddaughter, Emily. We were at Cub Foods, filling a cooler with road food for our 250-mile adventure to see my classmates, Mark and Karen, in their northern Wisconsin summer home. Instead, we grabbed some yogurt, clementines, apples, and fruit juice, as her mother had instructed . . . and of course the old standby, Cheez It, original flavor.

I didn’t think we’d use the marshmallows. The possibility of smores around a campfire was as likely as hearing a gentle rendition of “Kumba ya, my Lord” from Mark, I thought. But I would be wrong.

Our hosts have developed a gorgeous summer home over the past 30 years, tucked beside a spectacular chain of lakes, south of Lake Superior. It could now serve as year-round housing, but they winter in Stoughton, where they had careers and still have family.

We gabbed relentlessly on the front deck beneath their towering pines, in the silence of the perfect Wisconsin summer day. Earlier, a curious deer, ears erect, had stopped by to see what was going on. Sophie, the aging Bird dog, put a swift end to that incursion, once she belatedly spotted the interloper. Like many of us, however, she has hearing loss and was oblivious to the shouted commands by her master, as she merrily chased the deer way back into the woods, leaving Mark to patiently retrieve his faithful retriever.

Emily joined us on the big deck for a while, and was tasked with finding the classmates in the junior high yearbook. She did, thankfully, but was stunned to learn that grandpa was not bald in seventh grade. We laughed at past stories, enjoyed the present, and spoke of the future. We lost track of the day, and soon it was time to board for a pontoon ride to a 30’s restaurant -- made famous again by Johnny Depp in “Public Enemy”, -- which was the site of a Dillinger shootout just two lakes away. We looked for bullet holes as we waited for dinner.

Emily piloted the big pontoon, grinning from ear to ear, giving wide berth to the loons so as not to disturb. Home at twilight, we started a lakeside campfire, and what do you know, Karen brought out the graham crackers, chocolates, and marshmallows. Emily made smores for each of us. Chocolaty, sticky, nostalgic.

As night fell beside the still water, we named the stars, the close of a perfect evening with old friends, an unbroken bond, more than half a century old.

Mark may have been inspired, but he did not sing.
Posted at 6:27 AM No comments: 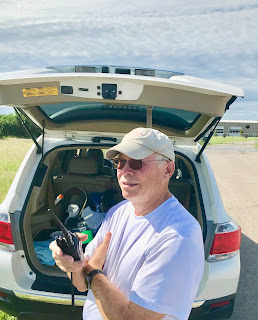 Spent part of the morning at the end of the Flying Cloud runway, watching take-offs and landings of vintage craft with my new neighbor, Andy. Watching the old WW II and Vietnam hardware at the Air Expo is always fun, but particularly so with a former fighter pilot who can interpret the squawks from the control tower. Andy, my age from Fergus Falls, flew F-111s for the military during the Vietnam era and later piloted commercial craft for a major airline. He’s retired now and mostly pilots his sailboat on Minneapolis lakes. We gazed skyward at formations of old prop training craft, got a glimpse of an Eastern bloc jet landing, and saw what we believed to be a B-36, similar to the Hiroshima/Nagasaki bomber. Free entertainment, taken where you can get it. 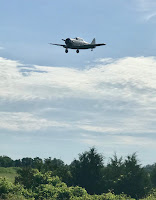 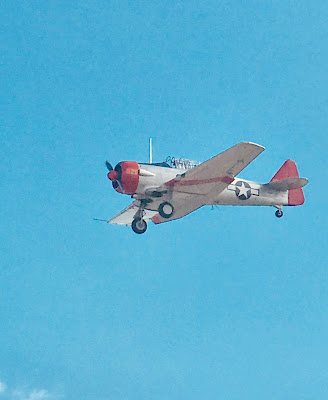 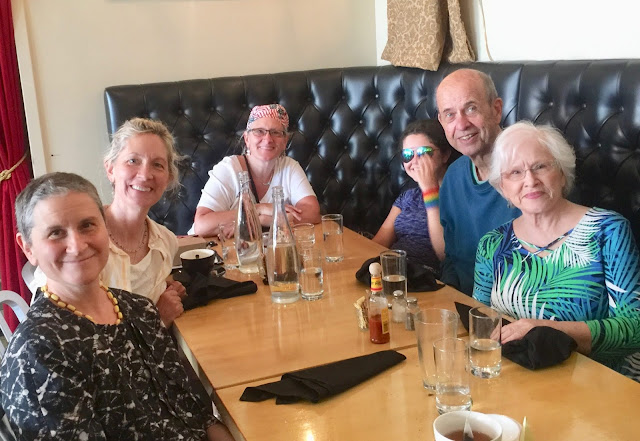 A deserted Blackbird Cafe served as the calm backdrop for an afternoon fete Sunday. Looking like Ladies Night luminaries, the three girls hosted Stan to a late lunch and birthday salute at the south Minneapolis locale. A good time was had by all. From left, Jennifer, Marcelline, Melissa, Emily, Stan and Kathleen. 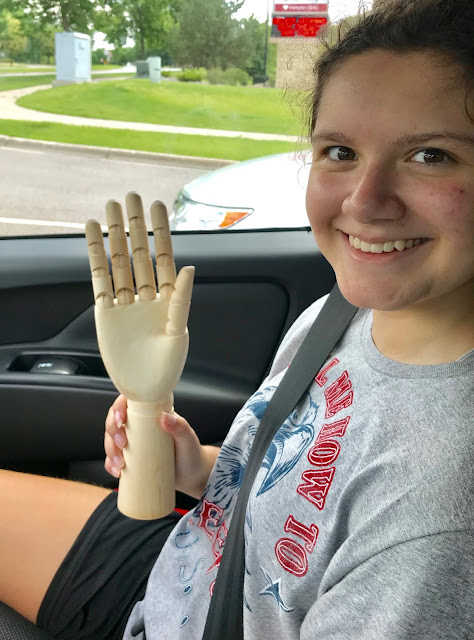 We went to Michael's today, and Grandpa couldn't say No. 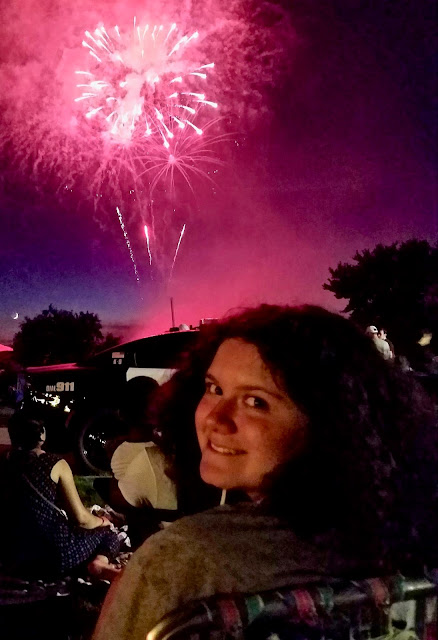 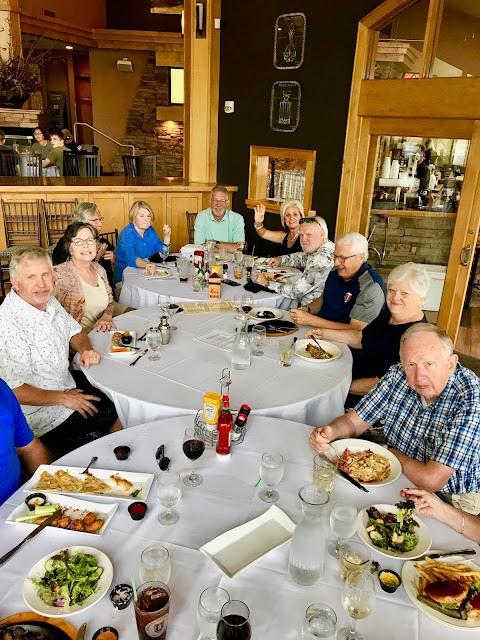 Attended Abbey Point Monthly Dinner last night and enjoyed an evening of genuine fun and laughter. The dinner has been going on every month since we started it twenty years ago, probably because the resident seniors are reminded that whenever the Civil Defense siren sings, it's time to eat together and swap stories. Over the years, the attendance has varied, but one rule is rarely broken: No discussion of Association issues. A wonderful gathering of neighbors has resulted and we drove over last night to enjoy it once again. We're happy in our new place, but nostalgia creeps in as we feel the closeness of this perfect-sized community on the Shakopee golf course.
Posted at 6:47 AM No comments: 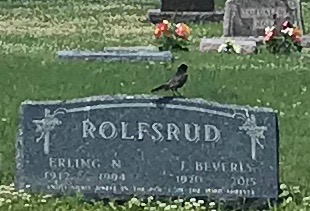 There was a visitor to the gravesite, totally missed by the photographer, but Kathleen spotted it. 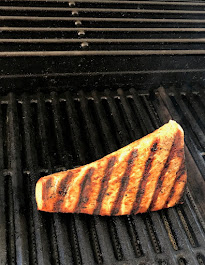