Save one for Stan, Hai! 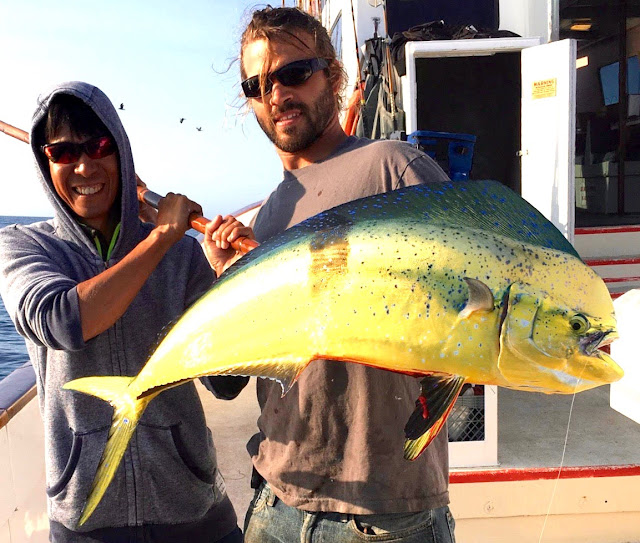 Stan's heading to Hotel California to spend some time with Hai Dang in November. Hai has been  deep sea fishing off the coast of Mexico pulling in big ones. He caught his first dorado today. We hope there are many more to take when Stan gets there. You'll see it here first, of course. Dorado is Portuguese for mahi-mahi. Mahi means "strong" in Hawaiian. The fish is being held up by a deckhand, Hai is apparently exhausted from reeling him in. 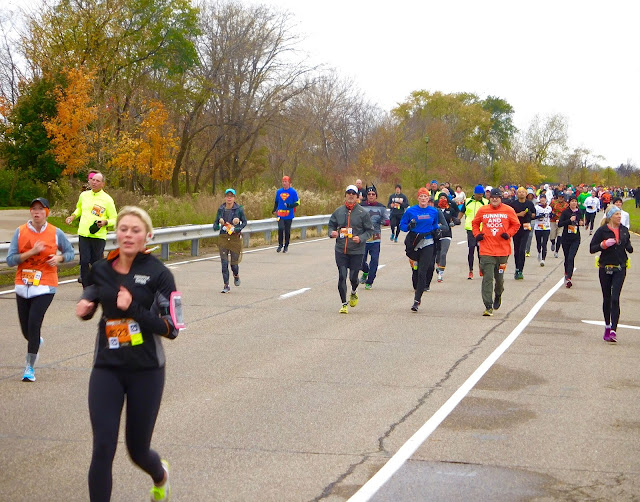 Shepard Road runs right past our place, giving us a good vantage point for the run of the day. Saturday morning they blocked the street for a huge turnout, despite the 33 degree weather. 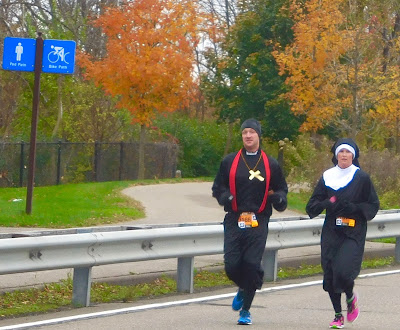 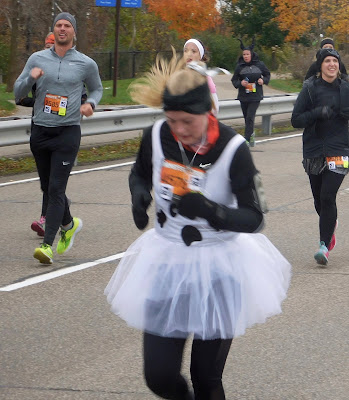 We don’t know who they are, where they come from, how far they are going or why they are wearing the ridiculous costumes, but eventually they all went home and they reopened the street. They looked like they had lots of fun and observers spent their time shouting and ringing bells to encourage the runners, prompting one runner to shout the classic Christopher Walken line, “We need more cowbell!”
Posted at 10:43 AM No comments:

LOCAL NEWS FROM AROUND THE TOWN —Afternoon callers at the Mr. and Mrs. Stanley Rolfsrud residence in St. Paul were Messers Robert Suel and Mark Olson, who motored in from Shakopee, Minnesota, for afternoon tea and stimulating conversation.  Mrs. Rolfsrud offered a delicious buffet luncheon. Mr. Rolfsrud poured. A good time was enjoyed by all. It was mutually resolved to meet socially soon again. Mr. Suel is the now retired advertising director of the Chaska Herald, a respected news compendium in the southwest suburban area, dating back to the Civil War era. Mr. Olson currently serves as its editor-in-chief. The gentlemen motored back to Shakopee before snowfall.
Posted at 6:24 PM 1 comment:

History around the corner. . . 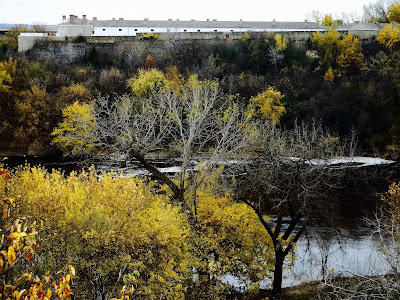 We're one mile downstream from this historic location. Get out your map. We're at the confluence of the Mississippi and Minnesota Rivers. That's Colonel Josiah Snelling's home at left with the view, the barracks are the long white buildings behind the Fort Snelling wall. The famed Round Tower is at right. We are located on the opposite side, just off Shepard Road and above the Watergate Marina. It's obvious where the muddy Minnesota meets the pristine Mississippi at Pike Island. From that point on the waters mix and join with others on the 2,000 mile trip to the Gulf of Mexico.
Now that you know where we are, come and see us sometime.

A colonoscopy then a little excitement. How was your day?

Seven paramedics and firefighters came en masse to Buca’s Restaurant in St. Paul today to see about a man whose wife was holding up his head so it wouldn’t fall into the spaghetti sauce. The man was passed out, not drunk — he was drugged and dehydrated. A fire engine rolled from Station One.

Capt. Jeff joked that when it is Buca’s, they all come.

Stan has been prepping for two days for a traditional colonoscopy. He drank the prescribed bottle of magnesium citrate on Monday night, began his fluid diet, then completed the awful routine by drinking the gallon of GoLytely Tuesday and early Wednesday morning. Seemed like he had enough to drink.

Colonoscopy complete and satisfactory this morning, and with a warning to take it easy today until the drugs wore off, Stan and his required driver were off to Buca’s for lunch.

It wasn’t until they finished the Chicken Parmesan and the spaghetti that Stan noticed something wrong. Dizzy, disoriented, light headed. “I don’t feel so good,” he told his wife and soon bowed his head. The next thing he knew, the paramedics and firemen in blue uniforms had surrounded him.

“Shouldn’t you be wearing black,” Stan quipped, not knowing what had transpired in the long minutes his head was cradled in his wife’s arms and the help was doing their best to help.

A shot of oxygen and a return of color to his face later, he said he could walk. “Stand slowly,” another paramedic said. “I’ll walk you to the car." Done. (Buca’s kindly comped the lunch.)

After a short nap, friends happened to drop by to see the new place. She’s a nurse. We soon diagnosed the problem. Despite drinking over a gallon of solution for the colonoscopy, Stan had neglected the instruction to drink 8 to 10 glasses of water a day. He was dehydrated… and of course the drugs and fasting didn't help. He just fainted.

At any rate, we’re grateful to the cadre of St. Paul paramedics, firefighters, and the good people at Buca’s for their prompt care and attention. We feel fine and are drinking plenty of fluids now.

And thanks as well to my wife, Kathleen, for her love -- and for keeping my face out of the spaghetti sauce.
Posted at 9:30 PM 4 comments:

Going from 3,500 square feet to 1,500 square feet has posed quite a challenge in decision-making. Yes, No, Keep, Throw. We started the process last April, thinking that if we just filled the trash and recycling cans to overflowing and slipped some more into the neighbors' cans each week we'd make it easily. So we donated, sold on Craigslist, and gave generously to the heirs. A garage sale got more items. You would think that by August we'd be ready. Wrong.
It still took Four Men and a Truck to dig us out and move us, and we're just starting to get organized and free. But it is still "Save, trash or give away" as we work to get some elbow room in the new place.
What has been very helpful is the set up we found in the new garage. They've got a dumpster for trash, one for recycle and. . . a Free Table for stuff that you deem too good to throw away.
We've taken full advantage of the Free Table and delight as items disappear. We speculate who got the mirror, the table, the spoons, the pots we left, etc. ... that we laboriously hauled here from the old place, just to give it away.
When we really don't know what to do we can cheat and store some stuff at Dan's condo.
This Saturday we're starting to enjoy the fruit of our labors. We have saved the good stuff and the memorabilia, trashed the superfluous, and we don't think we'll miss any of that stuff we got rid of.
"Sweetie, I can't find my favorite red shirt."
Posted at 3:23 PM 2 comments:

Here is how it's done 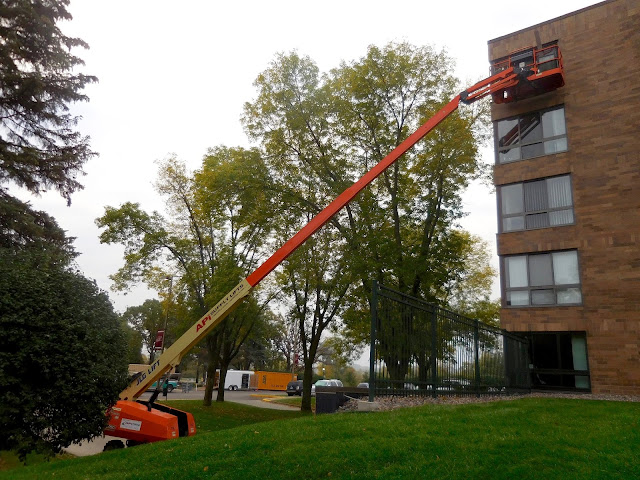 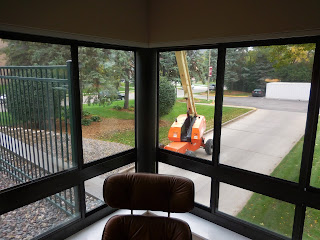 Our windows are complete. Here's how they are tackling the windows on the fifth floor. They can do about one unit a day. Hopefully October is warm. It can get chilly with the windows so wide open. :) 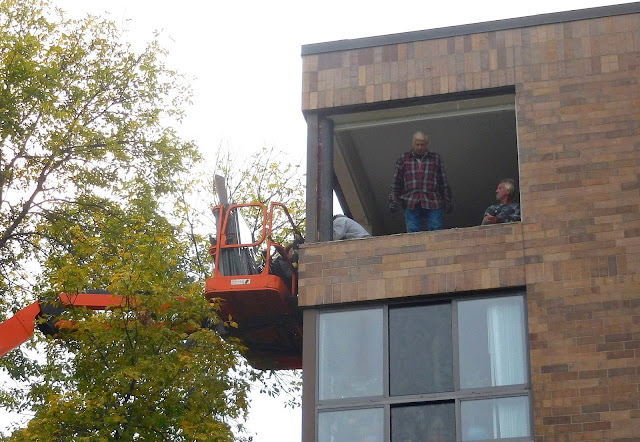 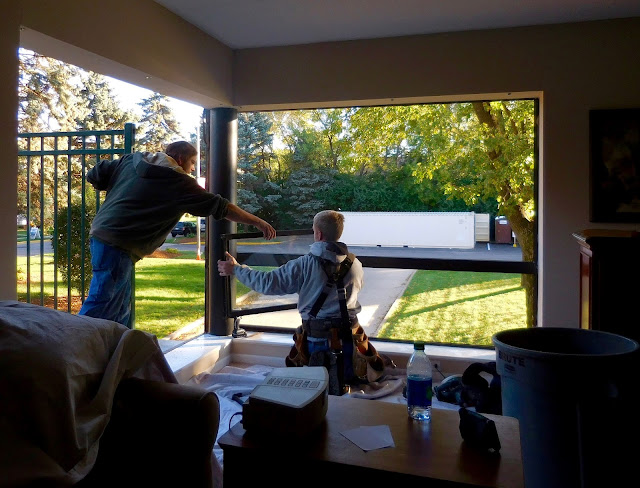 This is the last day of window replacement at our new St. Paul apartment. That's Birdie's field in the background. They will finish today if all goes well and we can continue the ongoing sorting and organizing. When will it end?
Posted at 8:46 AM 2 comments:

Whadda ya mean it don't fit... 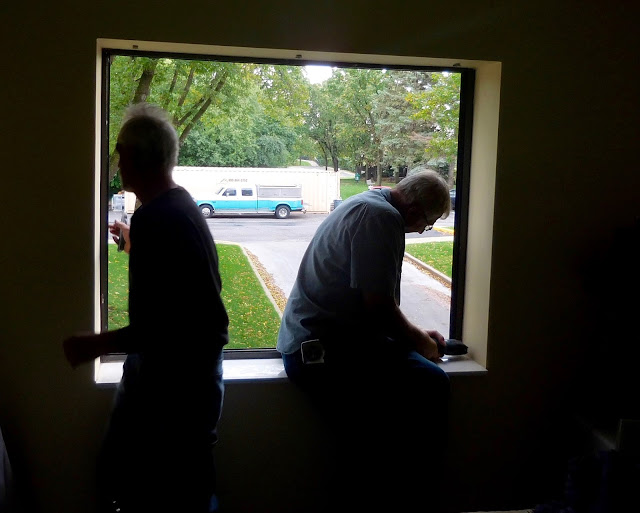 They're installing new bedroom windows today in our St. Paul apartment. So to adding to all the excitement of the move, we've prepared our rooms for the workmen. The new windows should be nice. Work continues on the main windows tomorrow. Jennifer's friend, Kathy, always makes sure they're appropriately attired at the annual Renaissance Festival near Shakopee.
Posted at 1:22 PM No comments: