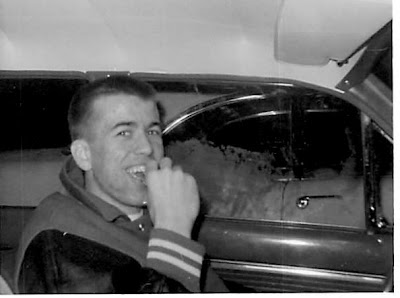 Before there were McDonald's in Alexandria, there was a McCarthy's. Here is Stan enjoying the precursor to the famous 15 cent hamburger in this Feb. 21, 1965 photograph by Karl Tegland. Karl unearthed a trove of black and whites this weekend while organizing his office. He emailed this series and some others we'll show later.
Look through the frosted window and you'll spot the distinctive lines and door handle of a '55 Buick. The photograph was taken midway during a burger-eating contest wherein Stan bet he could eat 15 of the little gut bombs in 45 minutes.

He failed, not because he didn't have the capacity, but because the gobs of everything-on-it mustard made him gag after a half dozen. Prudence would have called for a plain hamburger. But, sadly, she was nowhere to be found that day.
A burger-o-meter was created by another friend, Mike Bolin, to keep spectators informed of the progress of this important event. Karl not only photographed the day with his Insta-matic, he tape-recorded it and acted as play-by-play (or burger-by-burger) announcer. We had never seen such a thing as a portable cassette recorder until that day. Karl was very cool. He played guitar in a rock band with some older fellows and always had plenty of money. He was also class valedictorian. He now writes law books in Bothell, Washington. 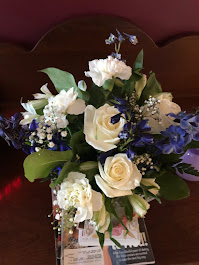 Her pain has ended. Ours is eased by the constant and enduring support of friends and family, for which we are grateful. Thank you sincerely.