Again, it's not about changing the light bulb. . . 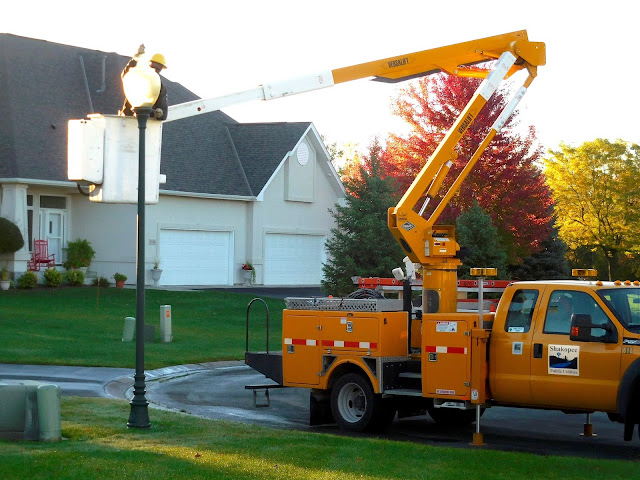 The light bulb works just fine. Everybody in the neighborhood knows it. It's the mechanism for turning it off and on, the "switch" if you will, that no one can figure out. Some folks say it is photo-electric; others swear it is a motion detector. Everyone agrees something isn't right. Walking to get the paper, it may be dark, but by the time you get to the end, the light has turned on. Then it goes off.
We've reported it to the city. They have dutifully replaced the light bulb, but the problem continues. Something got lost in translation.
With that in mind we wrote the following explanatory note to the good people at the electric company.
----------------
Subject:
intermittent street lamp
Message:
The street light at the end of the cul-de-sac on Abbey Point comes on and off randomly.
We have reported this troublesome unit before and it continues its intermittent behavior, leaving residents standing in the dark, etc.... a very quirky piece of electronics which doesn't seem to be motion or light sensitive, just quirky.
Happy to answer questions about it, but we're all thoroughly confused.
With the dark season upon us, we'll rely more on it. Phone or email response is fine.

----------------
That was yesterday afternoon. Promptly this morning the utility truck pulled up while the author of this note was still in his jammies, drinking morning coffee. Before you could say "Jack Robinson" the light bulb had been changed and the globe was being replaced.
"Hey, they're out there fixing the street light," the good wife reported breathlessly, returning with the morning paper.
"What? Already?"
The concerned citizen scurried outdoors and stood in his pajamas as the workman buttoned up the operation, ready to go to the next assignment.
"What turns the light on and off?" the citizen queried, fearing that his note had been entirely disregarded and reduced to "light out at Abbey Point." All that magnificent prose gone to waste.
"The dark," came the terse response.
"Well, the light bulb works just fine, the device controlling it does not. The photo device needs to be replaced, not the light. I thought I made that clear in my request for service."
"How long has this been going on."
"Oh, for years."
An hour later, the utility truck departed. We may have had a breakthrough. We await the night to be sure.
Posted at 10:19 AM