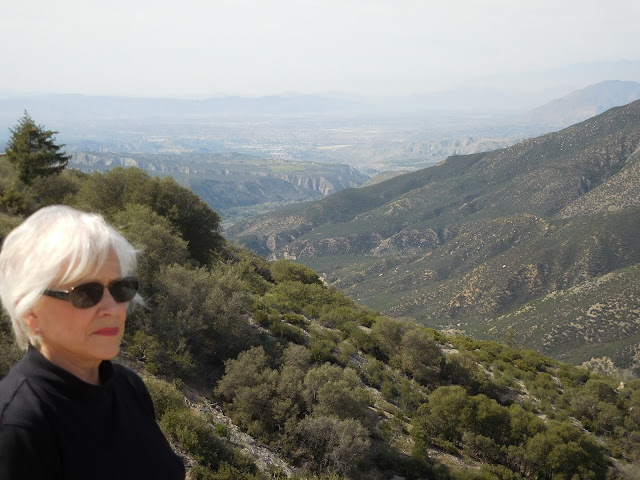 Halfway up Mt San Jacinto we found a cafe in a little town called Mountain Center. It was a good thing too, the curvy road was populated with Sunday sports car drivers and crotch rocket enthusiasts, eagerly testing their skills against a challenging mountain course. We needed a break from the heart-pounding action.
After breakfast at 4,000 feet, we left the popular Pine to Palms Highway and headed higher to the town of Idyllwild (pop 3,870). Our waiter had said that if we turned left there on Doubleview Road, we'd eventually get to The Point where the locals go on July 4 to look down on the fireworks displays far below. The entire town seems to be tacked precariously against the steep mountainside, affording spectacular views -- but no back yards.

Stunning pine growths obscure most of the the views of the valley; we had hoped to see our place from up there, no luck. . . it was a bit foggy anyway.
We read somewhere that these sturdy pines produce the biggest cones in the world and, sure enough, when we arrived at The Point, we found a pine cone and. . . it was huge. They come from Coulter Pines and weigh up to four pounds. Advising you to wear hard hats when working around them, locals refer to the cones as "widow makers."
We also found views stretching toward the Pacific and to our right spotted the ski runs on faraway Big Bear. On the other side of Mt. San Jacinto (elev. 10,580) there's an aerial tramway that, for $25, will take a senior citizen to a tony restaurant set high over Palm Springs. This historic tram boasts the world's largest rotating gondolas.
They've probably got some big pine cones over there too.

Tony restaurant? That must be new. When we went up on the tram, there were some picnic tables and vending machines.
You got a great vantage point where you were--very pretty.