With Dan on a power wheelchair now, the occasionally-used push model was just taking up space in his condo. We listed it on Craigslist in the Free Stuff section and within the hour David sent us a message from Inver Grove Heights that he needed a wheelchair for his wife.
Seven others who also responded got turned down. 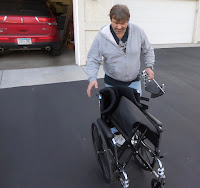 David arrived before rush hour traffic. He explained that his 50-year-old wife, Marie, had contracted a severe form of pneumonia that had immobilized her. She'll be going to Courage Center soon. We've never heard of pneumonia having such a debilitating effect.
We're delighted to see Dan's chair go to a grateful recipient and are amazed at the lightning-fast workings of the free stuff section on Craigslist.
Next task, pull the ad. It was up for a mere two hours.

i think that's why they tell us to get a pneumonia shot now and then, because it can be more debilitating in some cases. (I don't really know) I feel bad for the lady, but glad they got what they needed.