Three and one-half years ago our youngest (47) told us she had stage four metastatic breast cancer. The cancer had spread and she had a two to six year estimate of her mortality. We were devastated.

So began her fight.  International in scope, it involved the conventional chemotherapy regimens and mastectomy, but she was encouraged to try other things, and she did, including special diets, native lodges, Eastern treatments and so on. An exploratory trip to Mexico was started, then aborted. Since the beginning, her friend, Kate, gave her incredible support. Her boyfriend took over that role a year ago, and the rest of us did what we could.

This summer we had run out of solutions to try, the painful tumors were affecting arm movements, medications were exhausting her, and we resigned ourselves to accept whatever came next, always hoping for the best.

Then Jennifer learned of a cancer study looking for volunteers. A trial necessary before any FDA approval. Although she said no to some other studies in the past, this one sounded different, more in line with her values. Instead of just injections of a chemical that would hopefully kill the cancer, this compound is a one, two, punch. Yes, it contains chemotherapy but it also contains immunothererapy, which shows your own immune system that your cancer cells are something to get rid of. 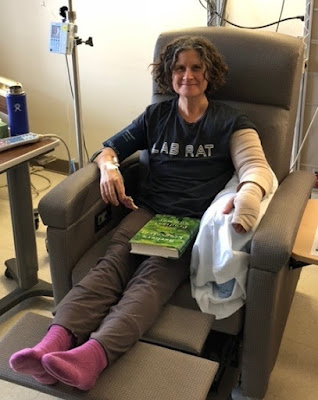 Having embraced the natural world most of her life it sounded appealing to Jennifer to teach her own body what to do, so she signed up.

With Jennifer wearing a shirt reading “Lab Rat” that she had printed at a T-shirt shop, she bravely began the trial on September 24, getting her first dose of the experimental cocktail. Nausea, exhaustion, fatigue, pain.

It was less than a month before we got the first positive news. The pain and swelling in her arm was subsiding. She could feel the bulges from the ping pong ball and large marble-size tumors shrinking. She didn’t need the arm wrap. The tumors were smaller, much smaller! We were ecstatic, but tried to remain cautiously optimistic. 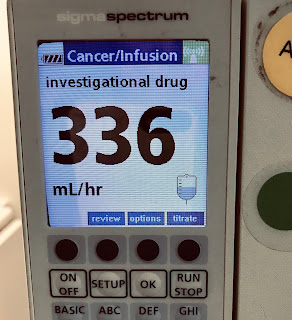 Today we had a meeting with her oncologist and a representative from the study, and also a reading from a CT Scan. We expected even more positive news. But this?

There were tears of joy of course, and we thought about how all our lives would change. We texted, we smiled, we laughed for joy, we told the man waiting by the elevators what had happened, such great news bursting our reserved demeanor. It was all I could do to not make an announcement in the waiting room, but then remembering the many people there who may face different outcomes and problems, I zipped it.

But I want you to know how joyful we are!

Has anyone seen our daughter's tumors? They're missing. They can't be found anywhere. She's had them for years. Whereabouts unknown.

We're so happy we get silly.

Jennifer will continue in the study, receiving regular infusions, all cost-free of course, she’s a test subject. Just because you can’t see the tumors on a CT scan doesn’t mean there isn’t something microscopic still in there. The infusions continue indefinitely. Right now she is the star of the show, the oncologist is stunned. They’ve never had this outcome before, at their office, Jennifer is the only patient taking this drug in this situation.

Jennifer is a true pioneer and our hero. It’s the same technology that miraculously cured Jimmy Carter of a different, unrelated cancer. This is a new adaptation and they’ll be surveying her for the rest of her life.

What GREAT news. I am so happy for all of you. Give my warmest greetings to Jennifer

Soooo amazing. What a wonder. And I hope you are all still smiling. i'm smiling with you.